Why Crazy Socks? Because every year a million patients lose their doctors
Skip to content 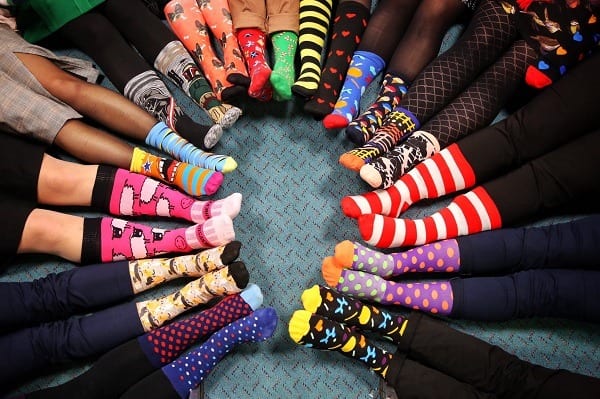 In 2015, I was a new surgeon working in a large public hospital, and it so happened that one of my regular anaesthetists was a woman of my own age and seniority.

We traded recipes and travel destinations, and discussed our transition from being trainees in our respective specialties to being in charge. I worked there for six months, and then moved away.

Although our conversations had been intimate, we did not keep in touch, in a way which is common in medicine, where working closely and moving on is often the norm.

In 2018, while discussing doctor’s mental health with friends on the eve of Crazy Socks for Docs day – a day created by Melbourne cardiologist Dr Geoff Toogood to publicise the mental health issues which affect doctors – I found out that six months after I left, my friend had died.

As this sad night unravelled, I heard the details of how she ended her life, planned perfectly as only an anaesthetist could. I learned how her colleagues, friends and family had been surprised. And I despaired how quickly she had been blamed for a lack of resilience, and forgotten by some.

A landmark study by Beyond Blue in 2013 found that in the Australian setting, 1 in 5 medical students and 1 in 10 doctors had suicidal thoughts in the previous year, with 3.4% experiencing very high levels of psychological distress. This is higher than the general community.

The rates of doctor suicide, on a global level, are increasing.

Dr Pamela Wible is a family physician in the United States who has investigated why doctors kill themselves, and the circumstances around it. What she found is that doctors are excellent at masking distress and appearing happy. Until the end doctors see patients, write notes and letters, advocate, book holidays and play with their children.

For certain demographic groups that remain underrepresented in medical leadership, such as women, further erosion of mental capacity is caused by harassment, bullying, assault, microaggressions, and pervasive pay and promotion gaps.

Women in particular can also face challenging home environments as female doctors may be subject to domestic violence in all its forms, and disproportionately continue to bear reproductive, childrearing and household burdens.

Seeking help can be punished. Fear of being labelled as ‘compromised’ by mandatory reporting systems; fear of letting their families down by making themselves uninsurable; the stigma of mental health issues which pervades medicine and makes doctors fearful of appearing vulnerable in front of colleagues because of an expectation that the ‘best’ doctors just cope with any and all challenges – all contribute to doctors not seeking help when they need it.

In short, this epidemic is driven by archaic and generally patriarchal ways to construct what medicine considers ‘excellence’, combined with chronic under-resourcing of health systems, loss of agency especially for junior doctors, the general baseline trauma that being a front line health care provider causes, and limitations on seeking help.

So in this environment of increasing distress, Dr Toogood’s simple initiative – Crazy Socks for Docs – is a springboard for important conversations about doctor well-being.

The premise is simple – wear crazy socks and talk about doctors’ mental health. It is an opportunity to ask our politicians, our hospitals, and our colleagues to interrogate the systems and cultures we have created within medicine, and how they affect not only patient care, but the well being of the clinicians who provide that care.

Every year, over a million patients lose their doctors. This is a trend we must reverse. I don’t want to lose any more friends.