Don't silence the violence is the #OchreRibbonWeek message
Skip to content 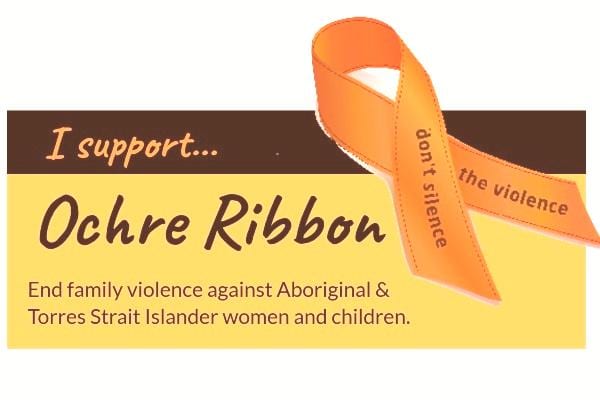 Wednesday marked the start of #OchreRibbonWeek which occurs annually between 12th – 19th February.

It is an initiative supported by the National Family Violence Prevention Legal Services Forum and its member organisations across Australia.

It’s a week to raise awareness of the impacts of family violence in Aboriginal and Torres Strait Islander communities and call for action to end the violence – particularly against women and children.

It's the start of #OchreRibbonWeek – a week to raise awareness of the impacts of family violence in Aboriginal and Torres Strait Islander communities and call for action to end the violence against our people – particularly women and children. #DontSilencetheViolence #SaveFVPLS pic.twitter.com/EAjzR7odnf

Aboriginal and Torres Strait Islander women are 32 times more likely to be hospitalised from family violence and 10 times more likely to be killed as a result of violent assault than other women in Australia. Shameful isn’t sufficient to describe this. Particularly when you consider that violence against women in Australia is so prolific that a woman is, on average, killed every single week.

In the first six weeks of 2020, seven women have already been killed violently.

Last week in the space of 24 hours two Australian women lost their lives at the hands of men they knew…at home. In Melbourne a woman in her 40s was found with stab wounds. In Brisbane a woman's house was burned & she died in hospital. 7 women THIS year. https://t.co/hD1odw29lO

Don’t Silence The Violence is the #OchreRibbonWeek message and remains tragically apt.

A week ago an Australian woman in her 40s was murdered at home in Seaford, Melbourne. She reportedly ran out to the street, injured, from inside her home and begged for help.

“She was just yelling my name, (saying) ‘Mick call the cops’,” her neighbour Michael said.

He called the police but it was too late. Paramedics arrived but the mother of three died at the scene from stab wounds. Her three young children reportedly witnessed the attack inside their home.

A man, reported to be a former partner, has been charged with murder.

She was stabbed in front of her children before running from the family home screaming for help.https://t.co/bgCASkTxKa

The woman, who cannot be named for legal reasons, was Aboriginal. Her death has barely made headlines.

It confirms what Antoinette Braybrook writes in The Guardian on Thursday, “the violence perpetrated against us rarely grabs the nation’s attention”.

"Every Aboriginal and Torres Strait Islander woman and child deserves to live a life free of violence and fear, and thrive in culture and identity." – @BraybrookA of @NationalFVPLS #OchreRibbonWeek #saveFVPLS https://t.co/dPgHxsz4Kx

Braybrook has shared some ‘uncomfortable truths’ about the national emergency that is violence against Aboriginal and Torres Strait Islander women.

Aside from failing to grab the nation’s attention, this violence fails to grab the resources necessary to deliver women culturally appropriate, safe and specialist system responses.

“Since 2013, not one FVPLS has had funding increased to match the CPI . That alone represents a cumulative loss of $9.7 million,” Braybrook writes.

“Currently we are subject to a two-year funding contract, which ceases in 2020. Ongoing uncertainty over funding directly affects our highly vulnerable clients and our ability to deliver consistent services to our communities.

Simply put, we cannot afford to have women in crisis lose hope of receiving culturally safe and specialist support in times of crisis. The results are often tragic.”

The cost of this violence in Australia in economic terms is projected to be $2.2 billion by 2021-22.

And that’s before you even consider the human cost. Last week a woman lost her life in unfathomable circumstances. Three small children not only lost their mother but may well have witnessed it. It is impossible to even begin to quantify the human cost of this trauma.

Adequate funding of critical services, like the FVPLSs, and an unwavering commitment to ensuring women in Australia can live free from violence in their homes and communities is the minimum response this crisis warrants.