How do we tell our children that our country is burning?
Skip to content 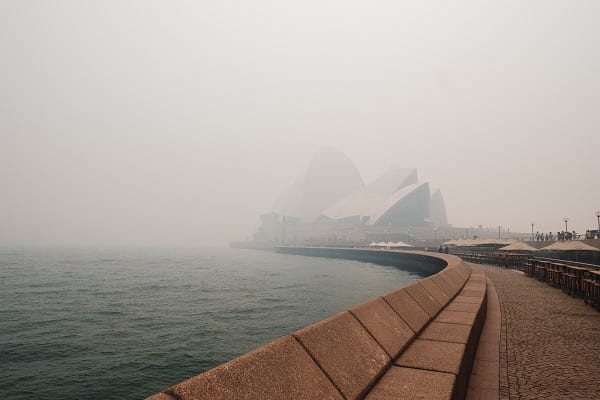 When will we be able to provide real answers and solutions to the questions our children ask about smoke, bushfires and the fact so much of the country is burning? Author Lexi Landsman pens this moving piece after watching her 3yo son’s asthma flare up in recent months.

The smell of smoke wakes me. It creeps through an open bathroom window. Thick, acrid, it sticks to my hair, my clothes, my dog’s fur. I quickly close the window and peer outside, noticing how the light has changed. It’s no longer that warm Sydney glow that makes me feel like there’s nowhere else on earth I’d rather be, than right here, in our beloved country. Toes crunching sand, ocean humming, sky the kind cosy blue you want to hug. But for weeks now, it’s been bleak. A monochrome city, tinged with a yellow haze. A sort of eerie film noir.

I’m distracted by the sound of my three-year-old son coughing – dry, raspy, unrelenting. I race to his room, grabbing his Ventolin inhaler on the way. He’s sitting upright, his light brown hair messy “like a fox,” he tells me, still half-sleep as I press the spacer to his mouth and tell him to breath in deeply. Four puffs, in, out, in, out. I exhale too. Though he is only moderately asthmatic, it’s the worst his cough has been since he was diagnosed with cough-variant asthma two months ago. I’m well aware of the risk the smoke can cause to those with pre-existing heart and lung issues, so I check and recheck that all the windows are closed, that there are no gaps where the smoke can get in. I’m already mentally changing the course of the day – he won’t go to daycare; instead I’ll try get an urgent appointment with the specialist.

When his cough continues, my husband steps into the bedroom, feigning calm as he hands over my bouncing one-year-old son, and issues two more Ventolin puffs and soon, the cough eases. But my anxiety doesn’t abate. In fact, in my chest, I feel a tightness too. Anger, that we are having another day of hazardous air quality, that firefighters are battling the bushfires for another day, that families are being displaced, that the land is burning, that wildlife are dying. And yet, over the past few years, our politicians have cut funding to fire services, expanded the fossil fuel industry, mismanaged river and water systems, and ignored scientists’ warnings about global warming. Even now, as we literally inhale ash, members of our government seem reluctant to link the country’s unprecedented bushfires and the resulting health crisis to climate change.

At 8:00 on the dot, I ring the respiratory specialist and manage to get an appointment. Driving there a couple hours later, my endlessly inquisitive son asks why people are wearing masks. I tell him its smoky again today and that the masks keep the smoke out of their lungs (although I’ve since learnt that unless they’re P2 masks, there is no scientific evidence that these masks actually protect against pollution or particulate matter). I notice how here, in the eastern suburbs, everyone is continuing their daily lives, quietly accepting this new normal. While we contend with a blanket of dense smoke hovering above us, not far away, bush and grass fires are raging around the country, almost 90 burning in NSW alone, 40 of those uncontained. I wonder how the light appears where firemen and women work tirelessly days on end, sleep deprived, their nights and days rolling into one fiery Armageddon. I imagine the smoke to be so thick that sky is black and that the light emanates only fleetingly from the glow of embers. I try to think that it’s so dark that they are spared from seeing the loss of livestock, the burnt cars, the houses reduced to rubble, the charred skeletal trees, and devastatingly, even human remains.

Once at the respiratory specialist, my son’s oxygen sats and lungs are checked, and to my great relief, he’s given the all clear. On the way home, thanks to two doctor-issued blue jelly beans, my son is full of energy and his usual tirade of questions. It’s not long before I am dodging for the umpteenth time the same question: why is the sun red?

I can’t tell him that our beloved country is on fire. That the sun is angry, red, its’ heart bleeding, as it watches from its smoky height as the land beneath it burns. I can’t tell him that our hearts burn too, not just from the smoke that’s heavy in our chests, but from the knowledge that every day homes are being destroyed, animals are dying, the landscape is smouldering. According to the NSW Rural Fire Service, at last count, over 700 homes have been destroyed and 2.7 million hectares of land have been burnt this fire season. And the hottest months of summer are still ahead of us. In the coming week alone, temperatures are forecast to reach the 40s.

So when my son asks why we’re staying indoors for another day, why the windows are shut, why our bifold doors to the lawn are closed again, I can’t tell him that last week Sydney’s air quality index (AQI) peaked at 11 times what is considered to be hazardous, that safe levels are between 34-66 and NSW Environment’s air quality measurements reached readings of well over 2000.

A Leonard Cohen song, Anthem, plays on the radio as we near home, the lyrics more pertinent than ever. “There is a crack, a crack, in everything. That’s how the light gets in.” And I can only hope there is some light at the end of this dark time. That maybe, just maybe, our government will take stronger action against climate change. So that we can stop dodging the questions our children ask. And so that when they are adults, and they have children, and their children have children, they know that we did everything we could for our beloved country.

Lexi Landsman’s debut novel, ‘The Ties that Bind,’ was inspired by the Black Saturday bushfires.