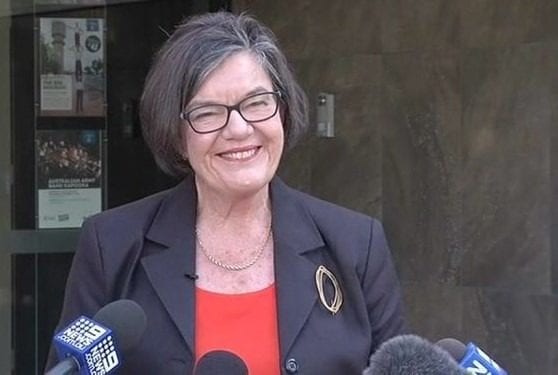 To call Cathy McGowan a trailblazer is an absolute understatement. She has completely transformed politics in Australia.

In 2013, she ran as an independent in the Federal election and successfully unseated the long-time sitting member Sophie Mirabella, in what was considered a safe Liberal seat in Indi, Victoria. At the time, Cathy was described as “the next evolutionary step for political representatives” – other women have since followed, running as independents and picking up some of the safest Liberal seats in the country.

But Cathy will tell you over and over again that her time in politics wasn’t about her. This was about the community around her, the ‘Voices of Indi’ who organised to get Indi better represented, her family, and the many women who’ve come before her.

Cathy completed two terms and then supported the election of another independent, Dr Helen Haines, who successfully won the seat at the 2019 Federal Election and has continued with Cathy’s work, particularly to push for a National Integrity Commission — something Malcolm Turnbull, Scott Morrison and Christian Porter all promised Cathy at different points that they would deliver on, but have so far failed to do (more on that below).

Cathy made her political career happen with incredible community support, and took a new style of politics to Canberra where hundreds of her constituents watched her maiden speech, demonstrating to other parts of Australia that with great community support, independents can win.

Now she’s just published a memoir on her two terms in politics to help, she says, “explain the journey, because it just didn’t happen”, and shares more on her experiences with The Women’s Agenda Podcast.

She describes how politics wasn’t something she wanted for herself, but others saw her potential and she saw the opportunity to support the community. And she cites her experience with Australian Women in Ag, including the two years she spent as president, as creating a “strong nucleus” of support around her.

Cathy loved her home, her work and her farm – having bought her first land as a single woman in the seventies. She describes feeling a mixed sense of fear, grieving for the life she had, and absolute excitement, arriving in Canberra. She was in awe, interacting with so many famous people who would become her peers.

“Some of the Coalition men looked at me, and they saw an older country woman. Then they would get very surprised when I got things done. They just couldn’t see how it happened,” she says.

“Once I found my stride on the topics I knew about, there was really no stopping me. I was then able to bring my community skills to parliament and they were totally transferrable.”

She says that women, and particularly regional women, bring a collaborative approach to leadership. “We don’t have to be the top dog or the show pony. You can work in a community, people come on board and you move forward in a harmonious way.”

“I just know that politics would be so much better if we had more women with that coalition building, clear focus, work hard, keep the ends in mind style, and not getting distracted by politics. If at the end of the day it hasn’t got my name attached to it, that’s no big deal.”

For women looking to get into politics, she believes the independent path is a way to avoid selling out to the issues of a bigger party that don’t align with your values, She suggests doing a course like Pathways to Politics or Women For Election and then finding a mentor in politics. Meet them, volunteer with them, and get to know how they do their job.

Be your ‘best self’

In 2019, Cathy received a parliamentary integrity award for her work in office, which she took as an opportunity to call on the Commonwealth Government to re-assess its position on asylum seekers held in indefinite detention in the Pacific. She said at the time that “people of integrity know when justice, compassion and mercy are of greater service to the nation than force, fear and punishment.”

Speaking now in 2020, Cathy says she’s always seen integrity as linked to the kind of politician she wanted to be.

But it takes constant work. It’s about constantly evolving to be your ‘best self’ and accepting feedback along the way. During the 2013 campaign for office she recalls how everyone who volunteered was asked to sign a “values document” regarding how they’d behave during their work, which was later translated into the “be your best self” mantra.

It also became a mantra the community would use to hold Cathy to account. She recalls how a lobby group said she hadn’t spoken up enough about offshore detention: Cathy thought she’d done enough, but they pushed her to do more. She found that she was able to open doors for this group.

“The community called on me to keep being better. When I’d reach my limit, they’d ask me to do more,” she says.

Cathy is one of 13 siblings, with three brothers and nine sisters, and grew up on a farm in rural Victoria. She credits her mother – a ‘dairy farmer’s wife’ and clearly a very busy mother – as being a fantastic model for navigating the patriarchy and how it worked in agriculture.

She says that growing up in the country, there is the expectation that the community will look after each other. She describes how women in the Landcare group taught her a cooperative style of leader that taught her that all roles are important.

“The most important thing I learnt along the way is that you can be really busy doing busy work but if it’s not effective than you need to relook at it,” she says.

“So how do you be an effective leader? If you are being your “best self” you’re going to be much more effective because you’re not being protective and people can see that you are who you are and they will gather around you.”

Ultimately, she believes it’s important that older and more experienced women put their hand out for those behind them. She’s seen this in action and has experienced the benefits not just for those individual women, but for the organisations, institutions and the communities they’re aiming to improve.

“So when, as they say in agriculture, the harvesters of tall poppies come past, they might knock one of us off but there will be three or four coming up behind us.”

“That warmth, that sisterhood and that generosity of women leaders reaching out and helping other leaders, it’s something I really hope my book does to inspire other women to think about politics,” she says.

An integrity commission, ever?

Cathy fought tirelessly for a Federal integrity commission during her time in office, something her successor Helen Haines is now continuing with.

But Cathy now shares little confidence that it will actually happen in the current political environment, given she’s been let down on the issue previously by those still in power.

In 2018, Malcolm Turnbull, Scott Morrison and Christian Porter told Cathy they would support an ICAC, or its equivalent at the Federal level. “These three people said they would do it, and then they found all the excuses in the world not to do it.”

“People like Christian Porter, he doesn’t have the courage, or the understanding I think. Well I don’t know why he won’t do it. It doesn’t make sense to me why the government wouldn’t do this when every single state has got one. But clearly, there’s something holding them back of incredible significance for the Coalition.”

So what more can be done to make it happen?

But ultimately, we need a wider range of people to get elected, particularly women.

And that’s particularly true on climate action, an issue Cathy is passionate about.

“I just hope with my book I can inspire more good quality candidates to run for the next election in the senate and the house of reps. Not just to be effective in their campaigns, but to get elected and actually show up the national party and the liberal party that they’ve missed the boat on this.

“You have to win the seat so you can be around the table. You really have to set out to win.”