Women make up just 17% of our STEM-qualified population. Lisa Harvey-Smith wants to change that
Skip to content 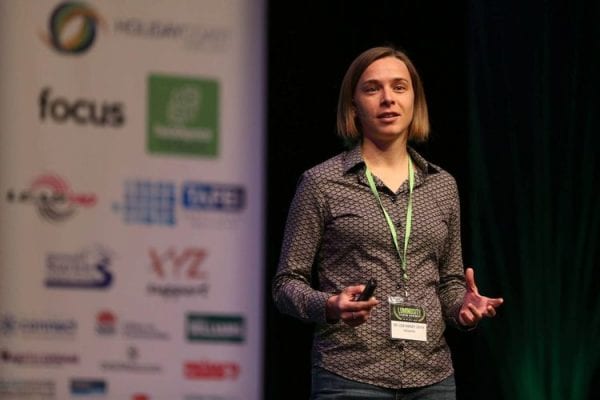 On July 28 2061 when Halley’s Comet next visits the sun, Lisa Harvey-Smith wants her  great grand-niece to turn to her and ask, “why did we ever need a women in STEM ambassador?”

Harvey-Smith is our current Women in STEM Ambassador and she’s needed for one very good reason: that just 17 per cent of our STEM-qualified workforce is female.

Speaking at the National Press Club today, Harvey-Smith discussed the urgent need for diversifying the STEM workforce, along with a couple of ideas that she believes can help.

Get The STEM Wrap in your inbox, our weekly update for women in STEM

“[We all want to live in a world] where a woman who might one day find a cure for cancer can follow her dreams without impediment – never to be bullied, harassed or marginalised from her chosen path,” she said.

“This change will not happen on its own. And it won’t even happen in our lifetimes unless we greatly pick up the pace.”

She noted that despite the more than 300 targeted women in STEM programs around the country, the rate of STEM-qualified women has grown from just 15 to 17 per cent since 2006.

“This mismatch is storing up a catastrophic future for millions of young Australians, who risk missing out on employment opportunities and economic independence.”

And she said diversifying the STEM-qualified workforce is essential, given that “technological solutions designed in a monoculture are seldom fit for purpose.”

She pointed to evidence that gender and racial bias occurring in society can be magnified in AI — potentially being the difference between life and death in things like self-driving cars and police databases, if those designing AI systems are considering only the perspectives of white men.
“Some facial recognition technology – increasingly used in law enforcement and in war zones – works 99% of the time for white men, but just 35% for black women,” she says.

“That can put people at great risk. There is also evidence for loss of employment opportunities, with some online advertising algorithms showing high-income job adverts preferentially to men.”

Harvey-Smith said her team that’s promoting gender equity in the STEM sector is focused on two key areas. The first is education, and the second is breaking down barriers affecting women’s retention and career advancement in STEM careers.

On education, she noted the need to disrupt the psychological condition of ‘maths anxiety’, which could be unwittingly passed on to girls from parents and teacher. She said it can be tackled through open-minded and positivity, by talking about numbers and counting with girls as much as we do with boys.

“Researchers in the US found that parents of two year- olds talk about numbers or counting – for example ‘how many flowers can you see?’ – three times more often with boys than they do with girls. By being aware of these potential biases, we can make sure we don’t perpetuate these behaviours.

“What we read to children also has an impact. When the market research company Nielsen analysed the 100 most popular children’s books of 2017, they found most to be dominated by male characters. Male characters were twice as likely to have speaking roles than female characters and had far more lines when they did speak.”

Getting STEM role models into schools will also play a vital role in showing the possibilities for girls in pursuing STEM-related careers.

But then after encouraging girls into STEM careers we also need to ensure they want to stay there, said Harvey Smith.

She highlighted recent research from the Male Champions of Change that found two thirds of women in STEM feel like their voices have been devalued at work, and around half see a lack of diversity in senior leadership as a career progression barrier.

Then there’s the lack of men taking parental leave, as well as the high rates of sexual harassment for women in STEM.

“Solutions are simple to identify, but not easy to implement. They include removing discrimination and bias from workplace practices, enabling equal carers leave and encouraging men to take it up, enforcing proper workplace behaviour, identifying targets for women’s career progression, and taking steps to eliminate pay gaps.”

Harvey-Smith said her team has launched a project which she believes will help address unconscious bias on career progression.

Working with a number of research organisations and funding bodies, they are pursuing a national trial on removing gender identifiers from reviews.

She also spoke about the success that they have seen in getting more women nominated for the Prime Minister’s Prizes for Science, through a strategic communications plan that aimed to encourage award nominations from diverse groups of people. The plan saw nominations from women increasing from 32 per cent to 42 per cent in 2019, with the highest number of women ever recognised in the final prizes this year.