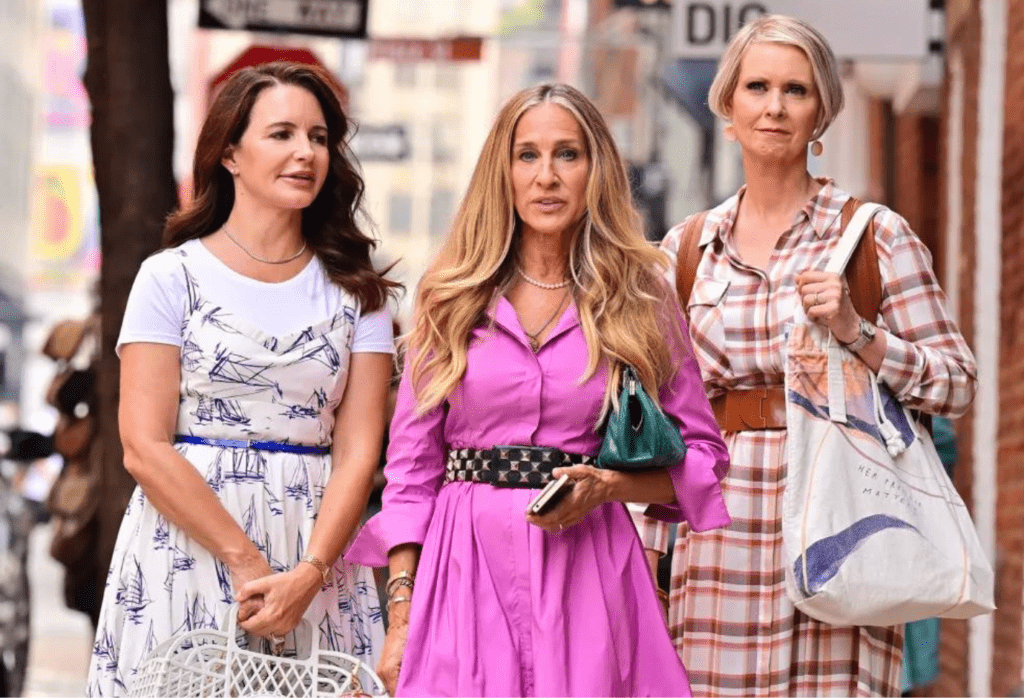 In the pilot of HBO’s revival of the Sex and the City franchise And Just Like That something spectacularly unexpected happens. That unexpected happening leaves one of our main characters single again — while casting a poignant tenor throughout the remaining episode (so far, BINGE has only dropped two episodes).

It’s not what you expect, but it’s better than what you might think.

Say what you want about the original series, this reboot is seamlessly lively and buoyant. Within the first few minutes of the pilot, we’re thrust right back in with the characters we love — Miranda, Charlotte and Carrie — though no Samantha.

Her absence isn’t a major tear in this new series. The writers have returned with glowing dialect and snappy scenes — instead of analysing one-night stands and securing the latest Manolo Blahnik pumps, the women have migrated to discussing whether to keep the grey hair or dye it, to booking mid-week seats at children’s piano recitals.

Miranda is heading back to university (Columbia, of all places) and has some awkward face-to-face interactions with her black professor. The world since last May has changed a lot, and the show tries its best to create characters who are aware of their elevated place in society. The execution is somewhat on the nose, but at least Miranda is earnest in her attempts to #checkyourprivilege.

Things have moved on, as they should. “We can’t just stay who we were,” Miranda says.

There are now black people in New York City (huzzah!) and non-binary people — Sara Ramíez is a welcome addition to the clan, playing Carrie’s boss who hosts a podcast about non-conforming gender and sexuality: quite a long way since the days of Carrie dumping a guy because he was openly bi-sexual.

Nicole Ari Parker is slotted into the role of Charlotte’s friend whose son also learns from the same piano teacher as her daughter. Attempts at retribution to historical criticism of the original show’s whiteness is made, like I said, but it really doesn’t help when you write a scene where a young black kid sits at a Steinway piano on a glossy Manhattan stage and fumbles at a beginner’s tune in front of a sea of white faces.

Charlotte’s two daughters are fully fledged teenagers now — Lily plays the ordinarily-troped Asian wunderkind (lazy storytelling by the writers) and Rose is a ‘tomboy’ defying her mother’s wishes to see her dress in feminised attire (she is played by Alexa Swinton from Billions — who does a very good rich-entitled-girl-angsty face.

Miranda’s son Brady is now a seventeen-year old sexed up teen (a bit confronting) — but the women are still asking questions about themselves, and their lives.

The fashion is still remarkable and bright and the city remains a loyal backdrop carrying these characters through middle age. And it feels like an extraordinary thing to see — women outside of motherhood and suburbia, carving a place for themselves.

In one seemingly unremarkable scene, the women are sitting at a restaurant, doing their usual dine and chat. The camera lingers on Carrie’s face, and we see her tapping away at her phone. Suddenly, I notice it — there it is, her hands, and the prominent hand veins I’ve always seen on my mother.

It’s beautiful to see on the screen. It may be small, but it felt almost revelatory. I loved seeing Miranda’s wrinkles too, and her unabashed grey bob. It felt real, and tender — two things that are rare in today’s media.

Sadly, Charlotte has had too many chemicals injected around her mouth – it’s like she is incapable of smiling at all, so she cries for most of the first two episodes.

When the original series ended its six year, six season run in 2004, I was still in high school and listening to Avril Lavigne’s album ‘Under My Skin’ on repeat.

When I watched the series for the first time last year, I had finally reached my thirties. I went through the motions the characters go through in the 90s, and then the early 00, and now, seeing these characters again feels spectacularly encouraging. Here is a show that depicts a child-less heroine in her fifties, one that centres her relationship with other women.

Female viewers in their fifties who went through their twenties and thirties watching SATC can now see a version of themselves that isn’t dull, drab or depressing — they can see that women don’t have to disappear after they reach their ‘un-fu*k-able’ years (see Amy Schumer sketch below).

“In every actress’s life, the media decides when you finally reach a point where you’re not believably fuc*able anymore,” Julia Louis-Dreyfus declares.

When the original series ended, Sarah Jessica Parker and Kristin Davis were both 39, Cynthia Nixon was 38.

When you reach the end of the pilot, you’ll learn that one of our main characters will be thrust back into a life of single-dom. Which is what the whole series in its original iteration was all about — single women, sexually liberated, emotionally voracious, exercising full agency and humanity and power.

Just seeing women live their second lives is hope in and of itself. The fact that this show gives me so much joy and hope — despite the fact that I’m not even white — says something about the quantity of representations of various kinds of womanhood we still seek from our television creators today.