Gender equality in parliament is still light years away...but why is that so?
Skip to content Australia could once count itself among the vanguard of women’s rights reform, being the first country in the world to grant (some) women the dual rights of voting and standing for parliament in 1902.

While we have made significant advances since then, we are still lagging behind global standards when it comes to equal representation. Before the 2019 federal election, Australia was 48th in the world in terms of women’s lower house representation, tied with Angola and Peru and falling below many other countries such as as Rwanda, Nepal and Ecuador.

The election has not brought much of an improvement in this respect. Though the proportion of women in parliament looks set to rise to from 33% to around 35%, this clearly falls short of equal representation. This is a problem particularly for the Liberal party: only 23% of their representatives are women, compared to Labor’s 47%.

And, despite the fact that Prime Minister Scott Morrison’s newly unveiled ministry is being touted for its “record” number of women, it too falls short of equal representation. The seven women in the ministry hold just eight of the 28 total cabinet positions.

This is a problem for political leadership across the spectrum. In light of Tanya Plibersek’s decision to not contest the Labor party leadership, clearing the way for Anthony Albanese to become the new Leader of the Opposition, men once again hold the leadership of both major parties. This trend extends to most of the federal minor parties as well, bar Pauline Hanson’s One Nation and the Jacquie Lambie Network.

Why are women still struggling to make gains in our parliament and what does this say about the state of our democracy?

From the mid-19th century, women around the world – including in Australia – were voicing their discontent at the injustices they faced in many aspects of life, such as their lack of political rights.

Though women could vote in some Australian states from the 1890s, the Commonwealth Franchise Act of 1902 standardised voting laws across the newly federated nation, granting women the right to vote at the federal level, as well as the right to stand for parliament.

This put Australia ahead of every other country at the time, including the UK (which gave some women the right to vote and stand for office in 1918) and even New Zealand (which took until 1919 to allow women to stand for office, despite having granted their voting rights in 1893).

These victories were celebrated at the time, but it is important to note that not everyone was able to enjoy them. The Commonwealth Franchise Act explicitly excluded Aboriginal peoples and women from Asian, African and Pacific backgrounds from placing their name on the electoral roll. In 1925, the act was amended to allow all naturalised citizens to vote. Yet, for Indigenous Australians it would be a much longer battle – they would have to wait until 1962 to win the right to vote. 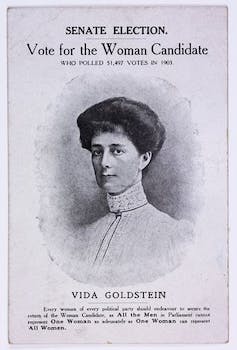 Women immediately seized on their new-found rights in Australia, approaching the 1903 federal election not only as voters, but also as candidates. In total, four women were nominated and stood as candidates: Nellie Martel, Mary Ann Moore Bentley and Vida Goldstein for the Senate; and Selina Siggins for the House of Representatives.

Vida Goldstein was the most well-known of this group. She had been active in the suffrage movement in Victoria in the 1890s, eventually becoming one of its most vocal leaders. She even travelled abroad in 1902 to promote the cause of women’s suffrage to a wider audience, including leaders like US President Theodore Roosevelt.

Though unsuccessful in her bid for parliament, Goldstein stood four more times between 1910 and 1917. Believing in the need for women to work outside party politics, she campaigned as an independent every time – a choice that, though true to her values, also proved a hindrance.

It took almost two decades for a woman to be elected to a parliament anywhere in Australia. This milestone was reached when Nationalist candidate Edith Cowanwon a spot in the Western Australian Legislative Assembly, representing the seat of West Perth. Her image remains familiar today, adorning one side of the A$50 note.

It would be another 20 years before women cemented their place as federal parliamentary representatives. In 1943, Dame Enid Lyons won a spot for the United Australia Party in the House of Representatives and Dorothy Tangney captured a seat in the Senate for Labor.

Why did it take so long? In spite of their new political rights, women continued to face discrimination from those who viewed politics as a man’s domain. Additionally, women struggled to make their voices heard in a system dominated by the major political parties and their ideologies. Fractured along these lines, they lost some of the solidarity fostered by the battle for women’s suffrage.

Where are we now?

In 2010, Australia finally got its first woman prime minister with Julia Gillard, a historic moment that should have marked a turning point for women in politics. But the proportion of women in parliament has increased by just a few percentage points since Gillard’s rise to the top.

Women also continue to remain a minority in higher-ranking positions. And though those elected to parliament represent a somewhat greater diversity than the candidates of the early 1900s, there is much more to be done on that front, as well. 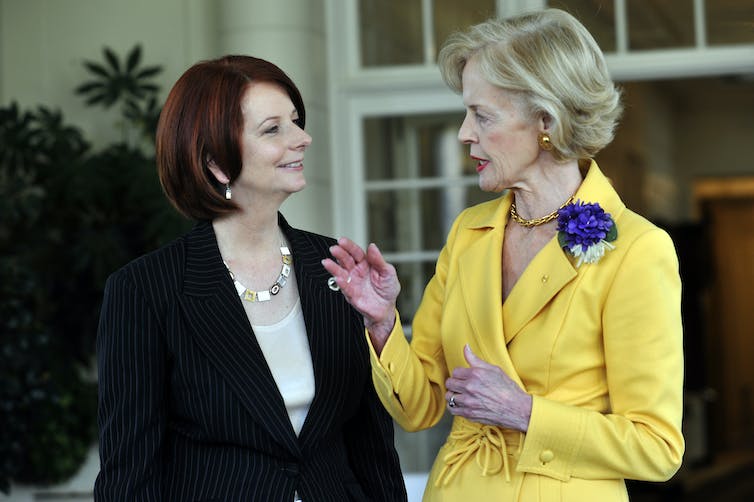 Julia Gillard speaking with Governor General Quentin Bryce after being sworn in as prime minister in 2010. Alan Porritt/AAP

But this is not just a numbers issue. Women in politics continue to be the targets of gendered abuse and misogyny not endured by their male counterparts, as Senator Sarah Hanson-Young’s recent experience with David Leyonhjelm demonstrates. This kind of entrenched sexism places limits on women’s ability to participate in politics on an equal footing.

The future of Australian democracy must be one in which true gender equality – both in terms of numbers and attitudes – forms a central part of the political system. We have a way to go yet to see this goal fully realised.

This piece first featured in The Conversation.