A rare Bluey blunder: Chilli isn't 'falling short' because she returned to work
Skip to content 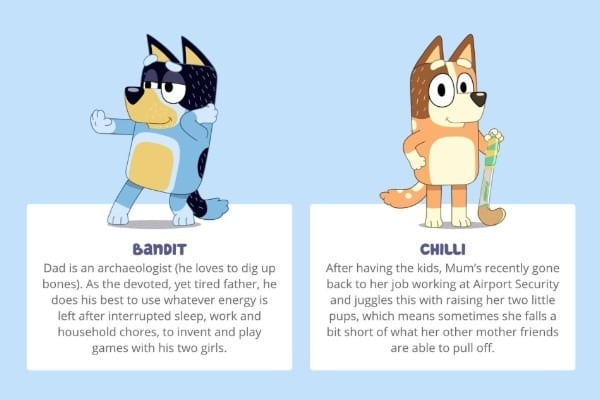 Generally when it comes to the subject of kids television having children in your life in some capacity is generally the only way to develop familiarity with what the super youngens are watching. (Why anyone without children would ever subject themselves to the audible torture of Peppa Pig or Paw Patrol is beyond me). Bluey, however, is an exception.

@OfficialBlueyTV Is the best kids show out there by far…actually don’t mind it playing on repeat. It’s funny and real. Parents & kids need check it out ASAP! #bluey https://t.co/D7XLY8Bqyc

Kids or not, the runaway series, made in Brisbane, broadcast on the ABC, nominated for an Emmy and picked up by Disney, about a sweet Australian blue heeler and her family is great television. Watching Bluey and her younger sister Bingo, go about their daily life with their entirely relatable parents, Chilli and Bandit, is a genuine pleasure.

It’s funny and sweet and refreshingly devoid of the inane, maddening and tired  stereotypes that is still depicted in kids tv programs. My dad routinely ropes my mum and other family members into watching certain episodes with him (Grannies) long after his granddaughters have returned home. It’s been lauded as groundbreaking and potentially transformative for the way it may positively influence parents.

But recently the team behind Bluey made a rare misstep. It published an image of dad Bandit and mum Chilli with short snippets beneath them. Bandit (who recently won father of the year) was praised for his devotion and energy as a dad.

To the horror of many devoted viewers who usually bow at the altar of all things Bluey, Chilli was described as falling ‘a bit short of what her other mother friends can pull off’ on account of returning to work a few days a week.

I love Bluey. My kid loves Bluey. If Jeremy suggested getting Bluey tattoos for Christmas, I would do it. But this is so incredibly disappointing from writers I've come to worship. pic.twitter.com/zkQB4p4X4w

Blatant mother-shaming might be expected from Leunig but from the creators of Bluey? Hell to the no. The feeling of falling short is so frustratingly familiar to so many working mothers that it’s practically ubiquitous. It’s a trope Chilli, the wonderful Chilli, needn’t perpetuate.

To the credit of the creators, rather than dig in, the co-founder of Ludo which created Bluey, Daley Pearson immediately responded to the online criticism led by Jamila Rizvi and the blurb was changed.

Thank *you for loving Bluey as much as we love making it for you. And thank you for the pick up 🧡 Sincerely. pic.twitter.com/hsYQLIygMR

At the risk of placing too much emphasis on a cartoon series, to my mind, part of Bluey’s magic lies in the fact it depicts how family life can be rather than how it has been for so long. It represents families in a new world order.

In that wonderful land I don’t want Chilli to even consider what other mothers think, let alone buy into the trope of falling short. She’s nailing it and seeing that reflected is exactly the kind of ground Bluey ought to be covering.