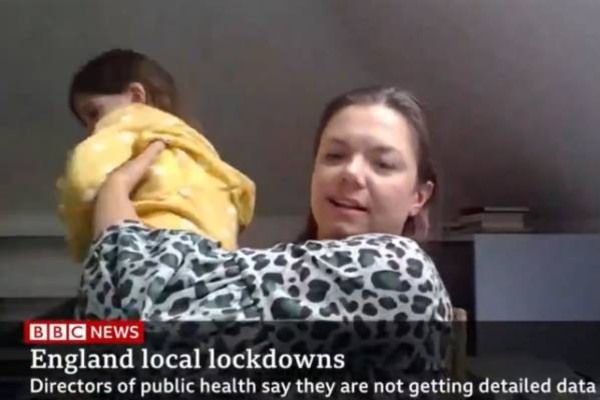 Remember the BBC-Dad? Of course you do. We all do. How could we ever forget the footage of those two young children storming into the study while their father, South Korea expert Prof Robert E Kelly, was being interviewed live on the BBC interview back in 2017? It was some of the best television ever inadvertently made.

And now there’s a new contender in the category. This time it was Dr Clare Wenham, an assistant professor of global health policy at the London School of Economics, being interviewed about local lock downs on the BBC when her daughter Scarlett stole the show.

Dr Wenham was unflappable. She continued speaking – intelligently – while her daughter climbed on her and attempted to distract her with a picture of a unicorn that she then experimented with arranging on the book shelves.

Upon being told her name was Scarlett, Fraser jumped in and Scarlett’s interest was piqued turning to face the camera.

‘Scarlett, I think it looks better on the lower shelf,’ he suggested. ‘And it is a lovely picture too.’

“What’s his name?” Scarlett asked. When she didn’t get an answer she increased the ferocity and urgency of her query, as is entirely consistent with children of a certain age.

Fraser stepped in. “My name is Christian,” he told her.

Satisfied, Scarlett then proceeded to explain to him that she was trying to decide where her mum might want the picture.

One clip of the interview has already been viewed two million times. At least 30 of those are mine. If you want some comic relief I suggest you watch it too.

And respect where it’s due. Dr Wenham was extraordinarily dignified and professional under pressure and Christian Fraser’s genuine interest in Scarlett and her picture was more than a little heartwarming. The fact the interview continued for several minutes afterwards is a credit to them both.

Having already declared Wenham’s appearance his all-time favourite news interview, TV critic and broadcaster Scott Bryan could not believe his lucky stars when inside 30 minutes a similar scene played out over on Sky News.

Sky’s foreign affairs editor, Deborah Haynes, was interrupted mid-interview by her son asking for biscuits. After telling him he could have two the interview was cut short which seemed a shame given the issue was resolved.

Frankly television interviews that don’t feature small children seem a little dull. We’re here for all of them.