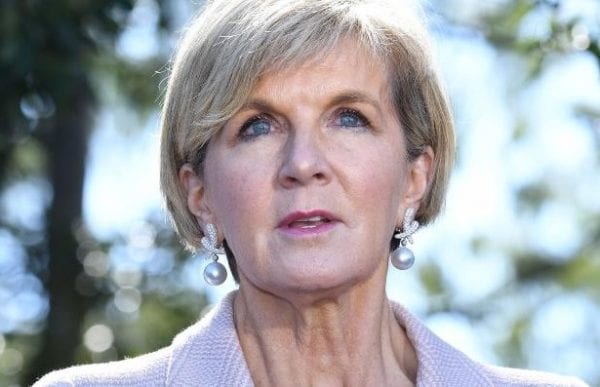 How else can the rejection of Julie Bishop’s prime ministerial candidacy be explained?  A person more popular and arguably more experienced than any other standing member in her party? A formidable Foreign Minister and loyal deputy to three separate leaders over the course of a decade?

There is no sense to be made.

Poll after poll had indicated Bishop was the Liberal Party’s best shot (outside of ousted PM Malcolm Turnbull) to win the next election. An SMS Morgan poll last week in fact, conveyed she held preferred PM by a considerable margin– 64 percent against Labor’s Bill Shorten, 36 percent. She was easily the electorate’s choice.

And yet on Friday, Bishop was the first to be dismissed in a party-room ballot, garnering just 11 votes of a possible 85 against Peter Dutton and Scott Morrison. The crushing defeat was no mistake.

A leaked Whatsapp conversation between government ministers was revealed on ABC’s Insiders Sunday morning, proving an active plot to withhold Bishop from taking the top job.

Screenshots from the group titled “friends for stability” allege Peter Dutton’s chief ally Mathias Cormann had secured votes for Bishop in a bid to keep Scott Morrison out of the race. As such, Morrison and his backers rallied their colleagues to vote for him over Bishop in the first round.

“Cormann rumoured to be putting some WA votes behind Julie Bishop in round 1,” a message assumed to be sent from Infrastructure Minister, Paul Fletcher read.

“Be aware that this is a ruse trying to get her ahead of Morrison so he drops out and his votes to Dutton. Despite our hearts tugging us to Julie we need to vote with our heads for Scott in round one.”

It is hard to grasp why choosing Morrison would constitute “voting with their heads”, but the message clearly worked. Scott Morrison won and Julie Bishop was left embarrassed and betrayed by the party she had served so faithfully for decades. She would never be “another man’s deputy” again.

And now it seems, the Liberal Party has lost her for good. Bishop confirmed Sunday that she was resigning as Foreign Minister and would not serve in Scott Morrison’s Cabinet. Though she tweeted she would remain on the backbench “as a strong voice for Western Australia” it is rumoured she’ll resign from Parliament altogether at the next election.

Today we have lost Australia’s finest Foreign Minister @JulieBishopMP I thank Julie for her loyalty and friendship over many years but especially as my Deputy. She has been and remains an inspiring role model for women here and around the world.

“For five years she has dedicated her life to our nation with a tireless work ethic and exhausting travel schedule,” Senator Wong said.

She said that while Labor had at times been critical of the Government’s foreign policy directions “Ms Bishop’s commitment to standing up for Australia both here and abroad has never been in question”.

“In particular I have deeply appreciated her commitment to bipartisanship and her personal courtesy to me,” she added.

Indeed, there is no denying that Julie Bishop will leave a resounding legacy within the Liberal Party and Australian politics more broadly. Most would agree she deserved to be Prime Minister. And even the staunchest opposer would concede she deserved a whole lot better than what she got on Friday.

Poetic justice will no doubt be served at the next election.