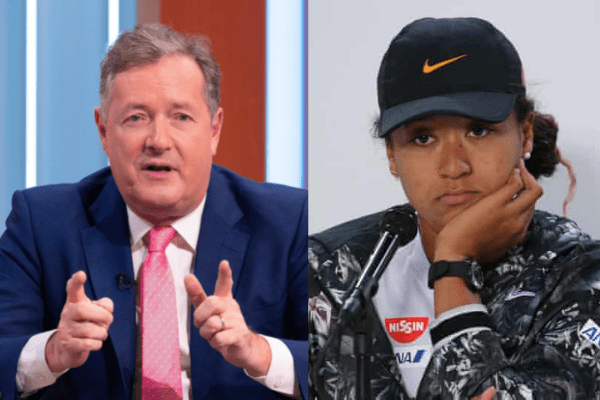 Thought you’d heard the end of Piers Morgan? Think again! The controversial TV personality has continued his long history of slating women who take a stand by mouthing off about tennis star, Naomi Osaka this week.

Joining the bandwagon of grumpy old men, Morgan criticised Osaka’s decision for pulling out of a press conference at the French Open, claiming that she was a “narcissist” and exploiting the issue of mental health to avoid attending.

Osaka was controversially fined almost $AUD20,000 and threatened with expulsion for deciding not to speak to media after her first-round victory. She officially exited the Grand Slam following the incident, saying she had suffered “long bouts of depression” since 2018 and gets “anxiety” when speaking to the world’s media.

“I was already feeling vulnerable and anxious so I thought it was better to exercise self-care and skip the press conferences,” she said. “I announced it pre-emptively because I do feel like the rules are quite outdated in parts and I wanted to highlight that.”

The 23-year old added that she never wanted to be a distraction and “accepts that my timing was not ideal and my message could have been clearer. More importantly, I would never trivialise mental health or use the term lightly.”

Most people around the world accepted and understood Osaka’s heartfelt response wishing her well and a speedy recovery, but Morgan patently viewed it differently. Taking to Twitter, he sensationally suggested that Osaka had “withdrawn because of the backlash to her attack on the tennis media for doing their job”, rather than mental health problems.

Morgan accused Osaka of playing the victim and using a strategy directly from the “Meghan and Harry playbook”. (In case you forget, he referred to Markle (another biracial woman) as a “disingenuous, self-serving wrecking-ball.)

When criticised for his lack of compassion, and called out for possible racism, Morgan clapped back: “What does her skin colour have to do with it? I’d have written the same column if Naomi Osaka was white.”

“Are high-profile women of colour exempt from criticism regardless of their conduct? Sorry, I must have missed that woke memo!”

Sadly, archaic attitudes like Morgan’s are not exclusive to the UK. The Australian published a piece describing the so-called “immaturity, preciousness and hypocrisy,” of Osaka’s conduct.

It referred to her as “a princess”, uppity” and her refusal to do a press conference “lame tokenism.”

“Osaka is in the very, very very privileged position, compared to anonymous and invisible Olympians, of having a governing body that has organised global television coverage of her matches to millions of viewers. Is she not thankful for this?”

Tennis’s governing bodies apparently disagreed with this take and Morgan’s. On Wednesday, the four Grand Slams released an official statement pledging to “create meaningful improvements” to their competitions and that they would support players going through mental health issues.

“On behalf of the Grand Slams, we wish to offer Naomi Osaka our support and assistance in any way possible as she takes time away from the court. She is an exceptional athlete and we look forward to her return as soon as she deems appropriate.”

The statement by the French, US and Australian Opens and Wimbledon also added that “mental health is a very challenging issue, which deserves our utmost attention.”

“It is both complex and personal, as what affects one individual does not necessarily affect another. We commend Naomi for sharing in her own words the pressures and anxieties she is feeling and we empathise with the unique pressures tennis players may face.”

“As Grand Slams, we aim to create the stage for the players to achieve the highest accolades in our sport.” After years of supporting teenage girls, Dannielle Miller says her OAM & promises to use the platform to speak out