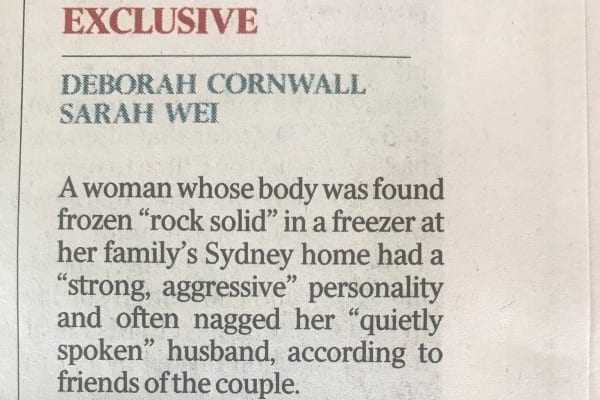 A woman whose body was found frozen “rock solid” in a freezer at her family’s Sydney had a “strong, aggressive” personality and often nagged her “quietly spoken” husband, according to friends of the couple.

These are the opening lines in a news story published by The Australian on Saturday under a headline that read, Body in freezer: Husband ‘a quiet man‘.

The “quietly spoken” husband is being questioned in relation to the horrific discovery of his wife’s body by NSW police last Wednesday. Renxi Ouyang was found dead, inside a newly purchased freezer, in the apartment they shared with their two children, aged 4 and 6, in Pymble.

Here’s how not to frame a story when a woman’s body is found. pic.twitter.com/GidVvalrYK

The ‘quiet husband’ had flown to China with their two sons the day before her body was found. According to reports the children are safe and with Renxi Ouyang’s parents.

Making this horrific crime even more disturbing is no small feat but The Australian story accomplishes it. The ‘good bloke who snaps‘ and murders his wife remains sadly familiar trope in the reporting of violence against women. But vilifying a murder victim as ‘aggressive’ in the opening paragraph of a news report while framing her husband as ‘quiet’ is worse still.

It is victim-blaming at its most blatant.

It may as well have said: ‘If this quiet, long suffering husband killed his wife it’s obviously because she nagged him aggressively’. Including commentary from friends that the wife “was always screaming and nagging at the husband” and that “everyone thinks of the husband as an honest, quiet man; a good man”, whether intentionally or otherwise, clearly promotes the idea that there are circumstances in which violence is acceptable or inevitable.

We MUST do better. Reporting on violence is a privilege & a responsibility. We have an obligation to do no harm. The stakes are way too high. This piece must be taken down IMMEDIATELY with apology & delivery of @OurWatchAus reporting on violence training.
https://t.co/rGRruAflKM

It is well established that the media is uniquely powerful in its capacity to influence culture, behaviours and community attitudes that drive violence against women and their children.

The media can help society reframe how violence is talked about: in particular it can make clear that violence is never acceptable or excusable.

It doesn’t matter what the circumstances are: being drunk, using drugs, having financial difficulties, experiencing jealousy, having significant caring responsibilities – none of these factors cause violence or make it palatable. But, from too many media reports, you could be forgiven for believing otherwise.

The crime was horrific earlier this week a woman’s body found stuffed in a freezer, her husband having left the country. Now a new article is stirring up anger over the way it portrays the victim. pic.twitter.com/oD9xjP9eDR

It’s estimated that around 15% of Australian media reports pertaining to incidents of violence against women still include elements of ‘victim-blaming’. Sometimes it’s in the form of including details about a victim’s behaviour –  that she had been drinking, was out late or went home with the perpetrator. Just as often though excuses are provided  for perpetrators: that he was drunk or jealous or “snapped” or “lost control”.

On a segment about this egregious example of victim-blaming on Sunday night The Project co-host Hamish Macdonald observed that from his understanding the female journalists who write the story are now being attacked and threatened online, which he isn’t sure is the appropriate response to a sensitive and important subject. It isn’t.

Threatening the authors of this story doesn’t help. Mistakes happen. But, equally, failing to recognise the dynamics at play and the role the media plays in influencing community attitudes is critical. This report doesn’t align with the standards for reporting on violence against women, not even close.

The Australian ought to acknowledge this and take the piece down.

If you or someone you know is experiencing family violence, phone 1800 RESPECT.

For counselling, advice and support for men who have anger, relationship or parenting issues, call the Men’s Referral Service on 1300 766 491.