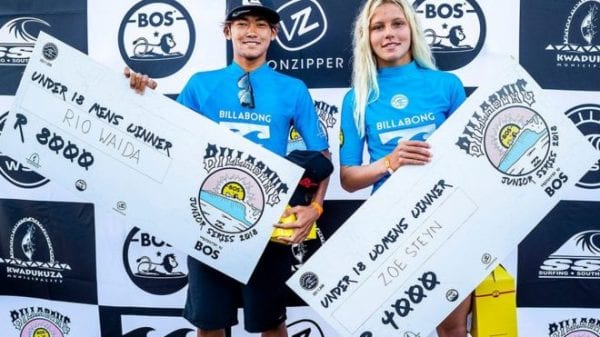 Disclaimer: Before the trolling commences, this piece is for satirical purposes only. Ladies, ladies, before you get yourself tied up in knots about this picture all over again, let me reassure you that the fury you’re feeling– the cold, fist-clenching injustice deep in your gut, is just a complete beat up!

These surfers would probably just tell you to “chill man”, the gender pay gap is all in your head, and there are some very explainable reasons why Zoe came away with half the prize money to her male equivalent, Rio.

Okay, so you might have been told that Zoe surfed the same ocean as Rio yesterday and shredded just as hard, but really, in actual fact she surfed a nearby lake. And c’mon guys a lake isn’t nearly as impressive. Sure, if she’d actually surfed the same waves as Rio, it would be legit to assume she should be reimbursed equally, but it’s just not the case.

2) His penis gave her an advantage

Um, hello, he was literally encumbered by the extra weight!

3) She only  tried half as hard

Again, she surfed a lake.

Also, she just seemed a bit indifferent–we couldn’t see any visible fire in her belly and frankly that was a bit disappointing.

You might not be aware of this, but Rio and men across the world have to pay double what ladies pay for their surf and swim gear. It’s only fair that he gets compensated in other ways.

It included an iron, pots and pans, cleaning products and a vacuum cleaner.

In all seriousness though, the event organisers and Billabong as the principal sponsor have really had a stinker here. They could have nipped the backlash in the bud straight away apologising to Zoe and offering her the additional prize-money.

Instead they chose to dig their heels in, make excuses for the clear discrimination and weather a torrential storm of public wrath.

For a retailer who just last year released this tone deaf advertising campaign, we shouldn’t really be surprised now, should we?