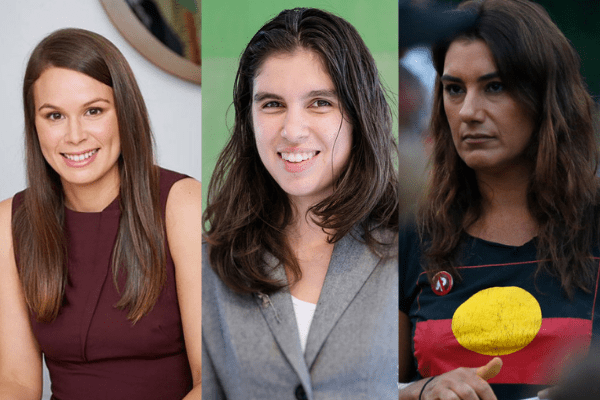 As Australia celebrates NAIDOC week, highlighting the powerful, urgent work of Aboriginal and Torres Strait-Islanders at work, we at Women’s Agenda want to make our list of ten of the most exciting and critical figures to watch.

“Can I say / white people really bore me sometimes / to be exact I grow tired with what’s unmentioned / idling in surf club bathrooms,” Ellen van Neerven writes in her poem “Chips”

van Neerven, one of the most prolific and celebrated poets working in Australia today, has won numerous awards for her collection of poems. As a person of Mununjali (Yugambeh language group) and Dutch heritage, their first book, Heat and Light was the recipient of the David Unaipon Award, the Dobbie Literary Award and the NSW Premier’s Literary Awards Indigenous Writers Prize.

She co-hosts and produces two podcasts, Extraordinary Voices for Extraordinary Times, joined by Omar Sakr to improvise new responsive poetry in a short amount of time, and Between the Leaves, a feminist podcast where they talk to Hermina Burns and pay homage to the work that women and gender diverse people do.

I first heard of Nayuka Gorrie when I saw them speak at the 2018 Stella Prize shortlist party at the Giant Dwarf in Redfern, Sydney.

Making a five minute speech that left an indelible mark on me in different ways, Gorrie’s unpretentious, uninhibited mannerism struck me so much.

A year later, I saw Gorrie speak at the Broadside Festival in Melbourne, where they took down the house with a blazing conviction about this country’s need to confront its history of genocide against First Nations people.

Gorrie is known as one of Australia’s most prominent and outspoken Aboriginal activists and writers; underscoring black politics and feminism. Gorrie draws much needed focus to topics such as constitutional recognition, black incarceration and youth culture.

Tarneen Onus Williams is a Yigar Gunditjmara, Bindal, Yorta Yorta person and a community organiser for Warriors of the Aboriginal Resistance.

In the last few years, she has focused her work on community action with Invasion Day, Black Deaths in Custody Justice for Elijah and the forced closures of Aboriginal Communities in WA.

Her writing on prison abolition and Indigenous rights has been published in IndigenousX, The Saturday Paper, NITV and RightNow. At the 2018 Invasion Day rally in Melbourne, Tarneen Onus-Williams addressed the crowd in a speech that went viral.

“All you fellas in your Australian flags should be ashamed of yourselves,” she said. The comments drew a media-storm from right-wing figures in politics and the media. Onus-Williams is also an executive member of Victoria’s Koorie Youth Council (KYC) and believes “the whole system needs to change.”

“I just want everything, all the governments to fall apart, because our people are dying and nobody cares,” she said. “The leaders of this country continue to ignore and oppress us. I am sick of our people getting locked up and dying in custody, of our young people suiciding. I don’t have all the answers of what is going to liberate us. I just know the current system isn’t working. Since colonisation nothing has worked for blackfellas on this land.

As one of only two practising Indigenous women barristers at the Queensland Bar, Melia Benn has had an extraordinary career so far, working across multiple contexts including private practice to the DPP and Coroner’s Office, to now practising as a barrister.

She was called to the Bar in 2018 at the age of 29, and has a dual practice in both Endeavour Chambers, Cairns and Griffith Chambers, Brisbane.

“You never knew what you were going to walk into,” Benn said of her job at Coroner’s Office in Cairns.

“Until I logged into my computer in the morning, I had no idea what my day was going to look like. It was a very cool job, and a huge privilege. You’re left to investigate and care for families who have just had the worst day of their lives, because when it comes to the coroner’s office, it’s either a violent or non-natural death. You have a big responsibility, and a lot of people to service because of how big the area is. You’re looking after people who can’t speak for themselves – they’ve passed on – but their families are still here and you want to give them answers and hopefully prevent further deaths like that happening again.”

At just 23, University of Newcastle law student Taylah Gray has been paving the way for students with a desire to use their voice to fight against injustice.

Sparked by the Black Lives Matter (BLM) movement in the US, she led Newcastle’s own BLM rally, leading a charge of around 1,000 people through the CBD calling for an end to Black deaths in custody and “over-policing” of the Indigenous. She is a member of the community group, Fighting in Solidarity Towards Treaties (FISTT), which is a social and political initiative aiming to represent and liberate Australia’s First Nations people. “I’m advocating for everything I am,” she once said. “It’s very important – it’s not just an interest of mine, it’s my essence.”

Kirsten Banks, a Wiradjuri woman who grew up on Ku-ring-gai country in Sydney’s Northern Beaches, has always loved the night sky. Five years ago, she began a Bachelor of Science degree at the University of New South Wales with a major in physics and two years later, published her first feature article in COSMOS Magazine.

Banks wants to educate the public about the wonders of astronomy. Already, she’s appeared on radio shows and is the resident astronomer on Triple M’s Night Shift with Luke Bona. She speaks regularly at Sydney Observatory, and loves to present Aboriginal Astronomy workshops during and outside of NAIDOC Week and National Science Week. Three years ago, she was named a 2017 CSIRO Indigenous STEM Award finalist. In May 2018, she wrote in The Guardian on her relationship to her First Nations heritage and the ways it interacts with her work as an astronomer.

“First Nations peoples of Australia have been studying the sky for tens of thousands of years,” she wrote. “They are the first astronomers of Australia. Their science may seem subtle at first, but once you open your eyes to this alternative perspective of space and the cosmos, you will find concepts of astronomical phenomena within these star stories.”

The judges said that “…as the first member of her family to attend university, Amy has outstanding academic and also community leadership. She has overcome significant barriers and is challenging us all to think differently about First Nation’s peoples. She is also a wonderful role model for women, particularly Indigenous women.

A Darumbal and South Sea Islander, she has spent years advocating for Indigenous social justice and ending education inequality. As the National Coordinator and Co-Founder of the National Indigenous Youth Education Coalition, she focuses her efforts on asserting Indigenous rights to education.

In February 2019, she wrote a piece for The Guardian Australia describing the ways Indigenous people have been inculcated in an education that is “a tool of colonisation.”

“When I think about my great grandchildren, I envision a future where we can push beyond what is known and create a school that is founded on Indigenous pedagogies,” she wrote.

“A society that truly believes that our People are essential to creating a fairer, more just society where our lands are healed and we care about future generations and the sustainability of our planet.”

Last month, as the AFL’s first Indigenous and second female executive, Hosch was awarded the 2021 South Australian of the Year.

In her “change-making” and “visionary” role, Hosch is celebrated for her work advancing women, Aboriginal and Torres Strait Islander people, and gender-diverse Australians.

She was behind the campaign to get the first statue of an Indigenous player, Nicky Winmar at Optus Stadium set up, and called for a review of anti-vilification policy within the sporting code earlier this year. She also campaigned to get the AFL to apologise to Adam Goodes, following the racial vilification he endured throughout the final years of his football career.

“I’ve been fortunate in my career to have opportunities and platforms, and if I’ve got those, I should be using those for things that really matter,” she told audiences last month. “I’m fortunate I get to spend my days and nights working on things I’m passionate about.”

“My fist was raised as I entered the Senate chamber as an expression of my people’s strength, resilience and survival and a symbol of solidarity with all the families of Aboriginal people who have died in custody,” she said.

Thorpe becomes the first federal Aboriginal representative for The Greens, filling in the shoes of former Greens leader Richard Di Natale following his retirement. With a long history of activism and advocacy for Indigenous rights as well as social and environmental justice, Thorpe wants more women and First Nations people at decision-making tables.

Earlier this week, she penned a piece for The New Daily, calling herself a “Blak grassroots Senator.”

“I am using my voice in Parliament to make a difference,” she wrote. “The voice I take to Parliament is represented by a message I carry from my ancestors. I have a responsibility to continue their legacy in the fight for justice, but also the fight for our place in this country.”