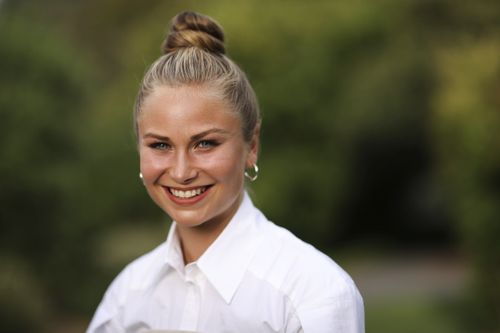 A young advocate who fought for a voice for survivors of sexual assault has been named Australian of the Year.

Grace Tame, 26, from Hobart, has won the award ahead of high profile finalists including former NSW fire commissioner, Shane Fitzsimmons, and former Commonwealth Chief Medical Officer Brendan Murphy, who became nationally prominent faces for their roles during the bushfires and the COVID pandemic respectively.

This is the first time in the program’s 61-year history that a Tasmanian has been Australian of the Year.

The awards in all four Australian of the Year categories – presented by Scott Morrison in Canberra on Monday night, ahead of Australia Day on Tuesday – have gone to women.

Tame, a victim of sustained abuse, took on the restrictive Tasmanian legal system to win the right to tell of her traumatic experience.

From the age of 15, she was groomed and raped by her maths teacher, a 58-year-old who was subsequently jailed. But Tasmania’s sexual assault victim gag law meant she could not legally speak about what she had gone through, although her abuser and the media could discuss the case.

With the help of the #LetHerSpeak campaign, Tame successfully applied to the state’s supreme court to be able to identify as a rape survivor.

The law was changed last year to allow sexual assault survivors to use their names in the media.

“Grace has demonstrated extraordinary courage, using her voice to push for legal reform and raise public awareness about the impacts of sexual violence,” the announcement of her award said.

Tame has spoken out particularly for those abused in institutional settings and has also used her media profile to advocate for other vulnerable groups.

Reflecting on her experience after winning her exemption to speak, she said in an ABC interview: “It’s so important for people to own their own story, their own narrative and to take back control of who they are. And it’s so important that survivors know that it’s not their fault and to have the support of the community and the support of the law.”

The other winners are:

Senior Australian of the Year:

Aboriginal activist, educator and artist Dr Miriam-Rose Ungunmerr Baumann, from Daly River in the Northern Territory. The 73-year-old is an elder, writer and public speaker.

In 1975 she became the Territory’s first fully-qualified Aboriginal teacher. She established in 2013 the Miriam Rose Foundation to bridge the divide between Aboriginal culture and mainstream society.

Young Australian of the Year:

Social entrepreneur Isobel Marshall, 22, from Adelaide. At age 18, she co-founded TABOO with a school friend to help women around the world by breaking down stigma around menstruation and providing greater access to hygiene products. TABOO sells women’s hygiene products in Australia, with profits going to One Girls – a charity providing education programs for girls and women in Sierra Leone and Uganda.

Advocate for migrant and refugee women, Rosemary Kariuki, 60, from Oran Park, NSW. The multicultural community liaison officer for the Parramatta Police, Kariuki, who fled Kenya in 1999, specialises in helping migrants who are facing domestic violence, language barriers and financial distress.

Chair of the National Australia Day Council, Danielle Roche, said the four winners were “committed to changing attitudes in our society and changing lives.”

“They are strong, determined women who are dedicated to breaking down barriers and advocating for people’s rights – particularly the rights of women and children.

“They epitomise the Australian values of respect, tolerance, equality of opportunity and compassion.”