The best & worst places to be a working woman: Glass Ceiling Index
Skip to content According to The Economist’s 2018 glass-ceiling index, a yearly assessment of where women have the best and worst chances of equal treatment at work in countries in the Organisation for Economic Co-operation and Development (OECD), Australia is ranked 16, just ahead of the OECD average which sits at around 18.

This index, the sixth compiled by The Economist’s data team, shows the disparity between countries in terms of workplace gender equality remains wide but women have made some progress towards equity in the workplace in the past year.

Our glass-ceiling index shows that the disparity between countries remains wide for working women https://t.co/Ti4LLTgjFt pic.twitter.com/DoKNgrudgA

The overall share of women in the labour force, with a tertiary education and those taking business-school entrance exams, which is a pipeline for senior executive jobs, grew.

Each country’s score is calculated by its average performance across ten indicators that include educational attainment, labour-market attachment, pay, child-care costs, maternity and paternity rights, business-school applications and representation in senior jobs.

#Sweden tops the @TheEconomist glass-ceiling index as best country to be a working women #GenderEqualWorld https://t.co/FgwT8EENc3

Sweden took over from Iceland as the best place to be a working woman this year, while Britain fell from 22nd to 25th place with fewer women attaining higher education.

America rose from 20th to 19th place thanks, in part, to a higher female labour-force participation rate, and more adult women with tertiary degrees. The average percentage of women on boards across the OECD is still quite low at 21.8%, up by just 1.3% from last year. 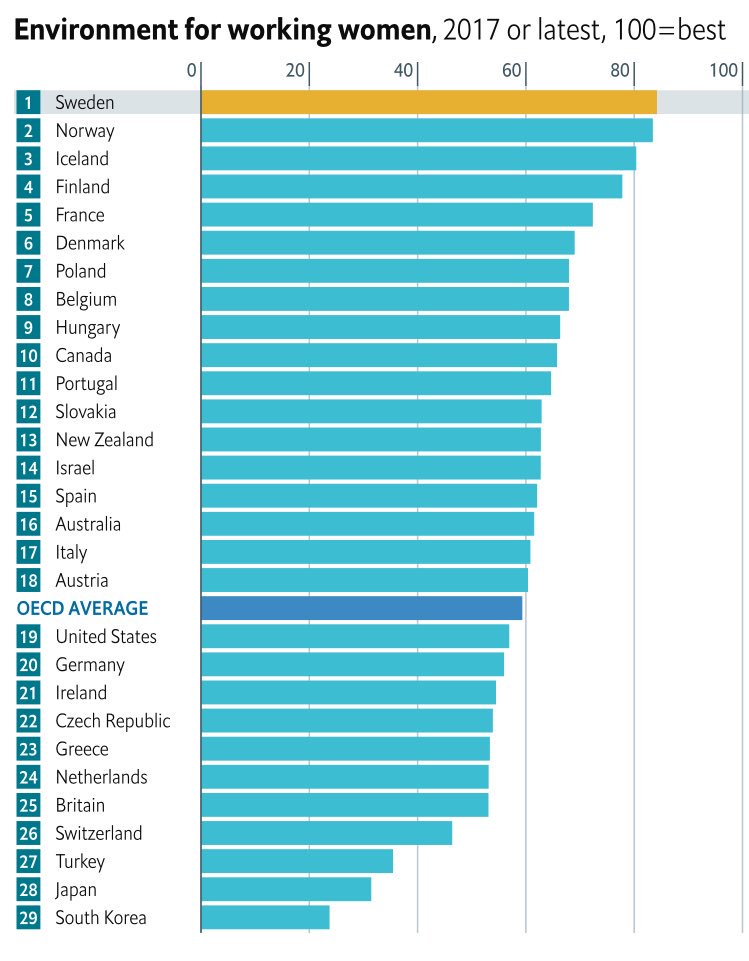 In Australia women’s tertiary education attainment is 7.9 points higher than men’s, while the workforce participation rate of women is 10.7 points lower than men.