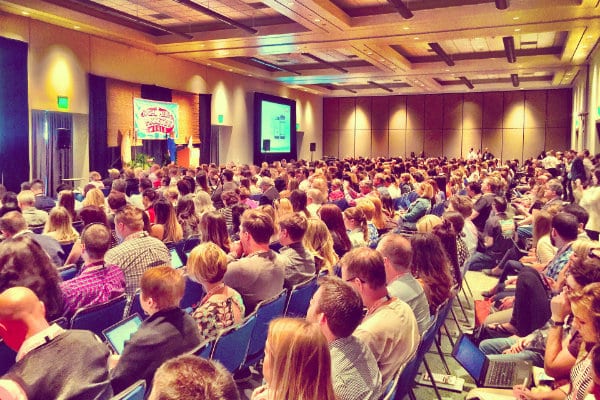 I have been to a lot of conferences but I have never seen one start like this. A senior woman stood up, in front of a few hundred of her work colleagues, and said she wanted to dispel a myth about domestic violence.

With a crack in her voice and tears in her eyes, she explained that while she has told her story to lots of women over the years, she has never told it to a room of her peers. There was no one in the room who knew what she had experienced.

There were a few people who knew the subject of domestic violence was close to her heart, but no one knew why. No one knew the extent of what she suffered.

Why are rates of domestic violence in Australia still so high? https://t.co/rpqukGdNW0

She was in a violent relationship for several years and the scars inflicted were both physical and emotional. It didn’t start out that way but his need to control her eventually became violent. There was jealousy and emotional abuse and financial abuse that piece by piece, bit by bit, eroded her confidence and sense of self-worth.

There were hospital visits, police called and several attempts to leave. There was a child distressed, begging his father to leave his mother alone. An altercation that resulted in the loss of her unborn baby was the final straw.

Before she began speaking, she said how daunting it was to reveal her story but said she was telling it anyway because stories like hers need to be told. Not just to survivors or women’s group, but to everyone.

You could hear a pin drop as she spoke, with honesty and raw emotion, and there was not a dry eye in the house. The impact of her words was immediate and visual: the room was silent and engrossed.

Workplaces can be safe spaces for women at risk: Our research on paid family/domestic violence leave https://t.co/TBQQOdgsC6

It was almost a decade ago when this happened and she wasn’t living in Australia at the time but she was fortunate enough to have an employer who she could turn to. She found refuge in a women’s shelter and had the financial and emotional support of her employer while rebuilding her life.

It quickly became apparent to me that aside from being a competent executive, this woman was widely respected and well-liked by her work colleagues. Her story undoubtedly challenged the perception some people in that room had about domestic violence. Statistically, it is likely that there were both victims – and perpetrators – of violence listening.

Paid Domestic Violence leave can be a game-changers, writes @GedKACTU More women must have access https://t.co/uP4TGJFITz

Over the next 24 hours, the men and women in that room, and several of the speakers and presenters who heard her, donated many many thousands of dollars to women’s shelters.

The conference wasn’t about families or violence or women: it was a professional development event but I know, ten years from now, there won’t be a person who attended that event who won’t remember her story.

Her story obliterated the idea that domestic violence is an abstract concept that only afflicts a certain type of person, and in doing she led a room from blissful ignorance to critically aware.