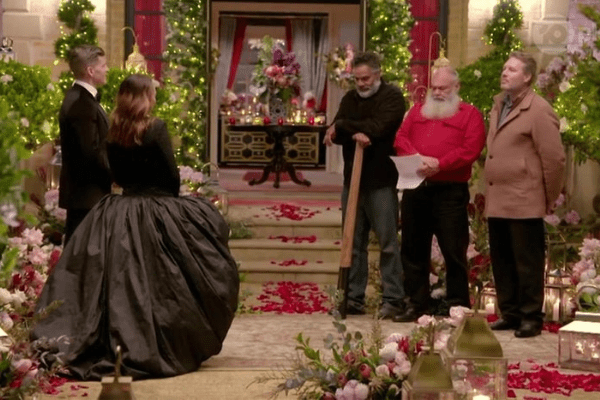 There’s a lot to celebrate about this year’s season of The Bachelorette, with Noongar-Yamatji woman Brooke Blurton setting new milestones for the twenty year franchise.

Last night, the latest season premiered with the 26-year old former Bachelor contestant making her entry on the red carpet towards three Indigenous Elders performing a Welcome To Country ceremony.

Blurton shed tears during the ceremony, marking the first time the show has opened with an Acknowledgement of Country.

“It was like a little piece of home,” Blurton said, responding to the ceremony, which acknowledged the Dharug country of the Bidjigal clan. “This is a perfect moment and I get tears. It wasn’t sad tears. It was a happy cry.”

Last night, the show’s official Twitter page accompanied the footage from the show of the ceremony with a further acknowledgement:

“We pay our respects to Elders and Peoples past and present. #BacheloretteAU”

This season’s Bachelorette, its seventh in Australia, is paving new grounds, with Blurton being the first queer, and first Indigenous lead.

Blurton was a former contestant in the 2018 Bachelor season, which saw her dropping out after reaching the top three.

Considering the show’s history of racism and discriminatory portrayals of people of colour, this latest season is proving that progress is being made in mainstream pop-culture.

“There’s been an icky trend recently, in both reality TV and otherwise, where POC are cast in super ground-breaking roles for diversity and representation – but then thrown to the wolves when it comes to inevitable racist backlash from viewers and even co-stars,” cultural writer Soaliha Iqbal wrote in May.

In last night’s premiere, Blurton recapped her past two attempts at finding love on television — with Nick Cummins in the sixth season of The Bachelor, and Bachelor In Paradise Australia in 2019.

“My motivation to find love has always been the same,” Blurton said during last night’s episode. “I’ve always looked beyond what a person looks like. It’s not sexuality or gender or genitalia. It’s always about connection.”

“The partner who is on the same team as me, that’s what I want.”

Viewers are also celebrating “multiple people of colour, not just your token POC placed straight into a stereotype, but a beautiful mix of people from various cultural backgrounds,” according to Iqbal.

As the first Indigenous ‘lead’, Blurton said she feels “a bit of responsibility not only to my community but also the queer community.”

“The barriers that will be broken by doing this will be huge,” she added. “All my life, people have tried to put me in boxes, and labels.”

On Instagram, Blurton expressed her sentiments accompanying a photo of her dazzling, Episode 1 outfit:

“In this moment, I thank my ancestors, my lucky stars, my mum and my nan for this wonderful journey about to begin and the path they have set me on. I can’t even express how lucky I feel to be your first First Nations Bachelorette and share with you a little piece of my heart.”

“Love comes in all forms and even if I have never felt what an unconditional love could feel like. I have a feeling someone is looking out for me and is sending a very special someone my way.”

In 2019, Blurton gave a Ted Talk about the importance of standing up for your own identity.

For most of her life, Blurton expressed that she had been given labels and identities that she didn’t identify with. “The girl from The Bachelor”…”not Aboriginal enough”…”not white enough,” she described.